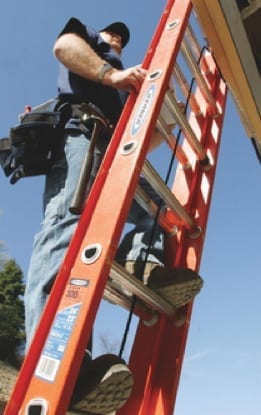 Recently I wrote an article about the ladder 4 to 1 Rule, which you can read HERE, a helpful guideline for properly using a ladder in providing common sense ladder safety in the prevention of falls from the ladder. Simply following the 4 to 1 rule won’t guarantee your safety, but used in conjunction with these 22 other “never do when using a ladder” common sense strategies should greatly reduce the risk of falls and other ladder mishaps.

To better understand why we shouldn’t do these things listed above, let’s take a look at each one in detail. Hopefully, after reading this article, you’ll be better prepared for safety the next time you pull out the ladder to do a home project.

Leaving a ladder unattended is an accident waiting to happen. Just the other day, while my family and I were out for a family drive looking at some of the new homes being developed in the area, I noticed that the workers at one particular job site had left their ladder up against the partially framed house after a long day’s work. It could be very easy and tempting for a child or adult, to climb up to look around, unaware of any unseen danger.

Once you are done using the ladder, put it away. Not just laid down on the ground, but properly stored away to prevent its use.

Avoid using the ladder in poor weather conditions such as the rain, snow, or wind. Any one of these environmental conditions can increase the likelihood of an accident occurring.

Most ladders are made of metal and are extremely slippery when wet (rain or snow) and strong winds can push over any ladder.

Note: If you do HAVE to climb up the ladder in poor weather conditions, make sure to take every safety precaution possible.

Some step ladders have rungs or steps on both sides of the “A-Frame” design and others only have rungs/steps on one side with support bars on the other side. The support bars are not designed for a person to climb on or to handle weight directly on them.

To prevent the ladder from being damaged and compromising the design of the ladder, you should only use the step/rungs side of any ladder.

Never use a broken ladder for any reason, even if it is “real quick”. A bent or broken ladder should be discarded immediately. In fact, inspecting the ladder before using it is part of the ladders pre-use checklist which you can read about HERE.

We’ve all been there, right – up on a ladder doing a project, whether for your home or on the job site, and you need to move the ladder over just a few inches to finish the job. You quickly assess the amount of time it will take you to climb down, move the ladder over, and climb back up, and compare that to simply performing a quick little shuffle or slide the ladder over while you skillfully hold on at the top.

Not surprisingly this is one of the major reasons why people fall from ladders. Always take the time to climb down and properly move the ladder over so that it is erected straight up and on even ground. If you would like to learn more about the major reasons why falls occur on ladders, read our other article titled, “Why People Fall from Ladders and How to Prevent Them”

While standing on the ladder, it can be extremely dangerous to try and push or pull on an object, regardless if it is big or small. The reason for this is because you don’t have the ability to brace yourself and counteract the force like you would if you were standing on the ground.

Remember, you are only as stable as the ladder.

A friend of mine has a lightbulb that needs to be replaced in a living room that has a 20-foot ceiling. When I asked him how he was planning on replacing the lightbulb, he said smiling, “Oh easily, I have a 15-foot ladder and I’m 6 foot”.

I quickly pointed out that ladders are not designed for the person to stand on the very top. The warning label on most ladders says to never ascend beyond the last step before the top of the ladder.

I think I answered this in the point above. This too is one of the major reason why people fall from ladders which is mentioned in our other article. Your balance is even more compromised and you have absolutely nothing to brace against.

If you chose option B, I worry about you! Ladders are not designed to be tied together even though we may see the feat performed on YouTube fails compilation. This is certainly an accident waiting to happen.

Ladders are designed to carry a certain amount of weight and not more. The person using the ladder plus all of his or her tools must not exceed the manufacturers recommended weight limit.

The weight limit will be shown on the side of the ladder. Exceeding this limit may damage the ladder and could put you at risk of injury.

Luckily I never did. While this looks fun, it can be dangerous. Especially if your fingers were to get caught on the side or you slip from a significant height.

Previous: What are the Tools That are Carried in EMS Pants?
Next: Why Do People Fall from Ladders and How to Prevent it