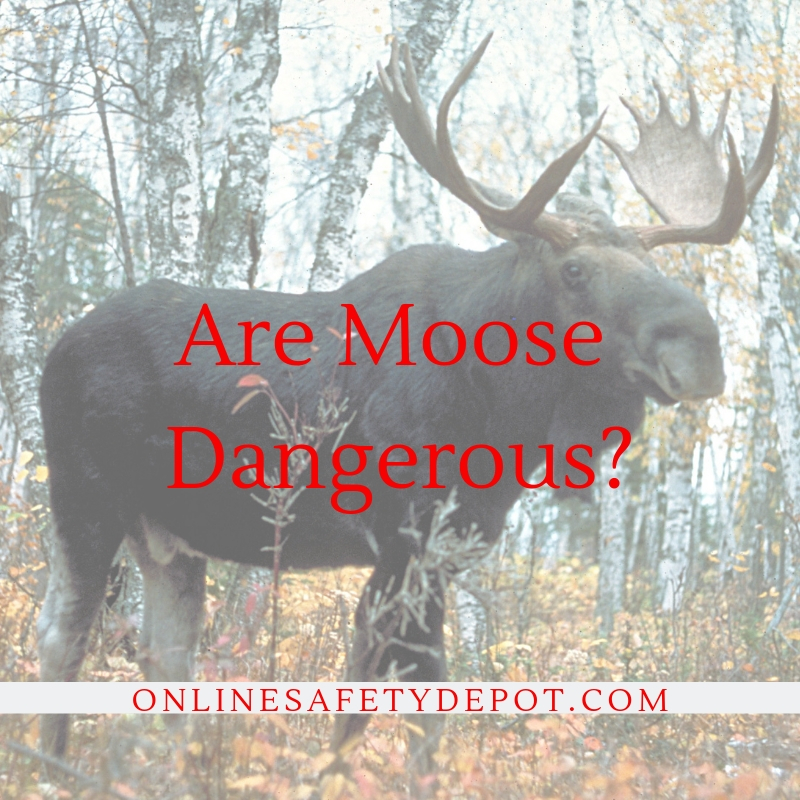 Over the years, I have hiked and fished in the back country of Yellowstone National Park and its surrounding mountain range more times than I can count every summer. I have had several “run-ins ” with the wild animals that call the wilderness home. There are just a few animals that get me nervous, and moose are one of them.

While moose are not known to outright attack humans, they can be very dangerous if they are provoked, startled or hungry. More people are attacked by moose each year than by bear and wolves combined. During the mating season, the large males will become a little more aggressive due to its increased hormones and the female moose will be much more aggressive when caring for its young in the spring. However, if you give them space and make noise while hiking in the mountains you will be just fine.

Size and Weight of Moose

Moose are very large mammals that have very few predators to worry about. Their strong long legs and massive upper body enable them to fend off any animal that may try to attack them. There are several different species of moose that live around the world. All of which share similar size weight and appearance, the average size is roughly between 5.5 feet to 6.5 feet at the shoulder height and weigh between 800-1500 pounds depending upon its environment and habitat conditions.

The largest moose is the Alaskan Moose which stands at roughly 6.9 feet and weighs 1500 pounds and can have an impressive antler spread of 5.9 feet across.

The males have large antlers that average between 60 to 80 inches and weigh between 50 to 70 pounds, with the heaviest recorded at 79 pounds. The size of the moose’s antlers is directly related to its health. The healthier the moose is the larger the antlers can grow.  This is good news for the moose as they use their antlers for both fighting and showing off during the mating season. The females or cows are drawn to the moose with the largest antlers.

When fighting off wolves or other animals, the moose will use its strong legs and hard, sharp hooves to strike with an impressive force that can easily be fatal. After kicking their threat, they trample the animal repeatedly until the opponent has been neutralized.

Where do Moose Live?

Moose can be found in Europe and Asia. Specifically, there are strong populations in Finland, Norway, Latvia, Estonia, Poland, Russia, Sweden and some in Czech Republic.  Moose are also found in North America, specifically, Rocky Mountain states, Upper Midwest, Northeast. However, Alaska is known for its large population of strikingly big, gorgeous moose. It is home to the largest species of moose in the world.

Within these regions, where are you most likely to get a good look at one of these magnificent creatures? Moose are often found in the valley flats with a stream where there is a lot of vegetation such as grass, shrubs, plants and other aquatic vegetation for them to eat. They are frequently eating in order to maintain their diet of 73 pounds or food a day during the summer months. When they are not eating, they can be found in the large timber trees where they hide from other animals or in the water to stay cool.

Due to the moose’s thick skin and heavy fur they are not suited for hot summer days. In the heat, they can easily become exhausted and loose the energy needed to eat enough to pack on the weight to survive the winters. To cool themselves down, they will wade the rivers or swim in the lakes. Their long legs and big hooves make them excellent swimmers. Even young moose are excellent natural swimmers.

Because of their thick hide, they prefer long winters where the snow is 3-4 feet deep so that they can easily trot through the snow away from predators but not too deep that restricts them from running away from the wolves who are able to walk on top of the snow. Additionally, the longer winters kill more of the ticks which is often the result of their deaths.

How Fast are Moose?

How many people are attacked each year?

Every year hundreds of people are attacked by moose because they either got too close or startled them. While most encounters are not fatal, some are. Like any wild animal, they are unpredictable and may be aggressive. As mentioned above, the males are more aggressive in the Fall and the females are more aggressive in the Spring when they are extra protective over their young.  Be on the lookout for any signs of fear or aggression to warn you of an attack.

Some signs that they are uncomfortable or feeling harassed are:
1- Thrashing their head around

4- Defensive poses- with their head lowered

5- Beware anytime they have a young one with them.

If you do encounter a moose that is showing signs of aggression, slowly back away and leave them. If a moose does decide to attack you, the best thing to do is run away from them. This is not because humans are faster than them because a moose could easily outrun them.  However, moose tend not to chase after animals because they prefer to maintain their energy. If however, you are knocked down and being trampled on, the best thing to do is curl up into a ball protecting your head and neck. Don’t ever fight back as that will show the moose that you are still a threat and they will return to trample on you again.

While moose have a mellow attitude, they can be unpredictable in their behavior and are very dangerous. They may attack if they feel you are a threat. While hiking in areas where moose are often spotted make noise to warn possible moose of your location so they are not startled and always be aware of your surroundings. Back away slowly if you suddenly find yourself closer than 25 yards from a moose. However, if you are a safe distance away from a calm moose and don’t see any of the signs of alarm above, pull out your camera and enjoy these incredible creatures.

Previous: How to Safely Store Water for Drinking – Simple and Easy!
Next: Six Simple Ways to Defend Yourself From Flu Season!