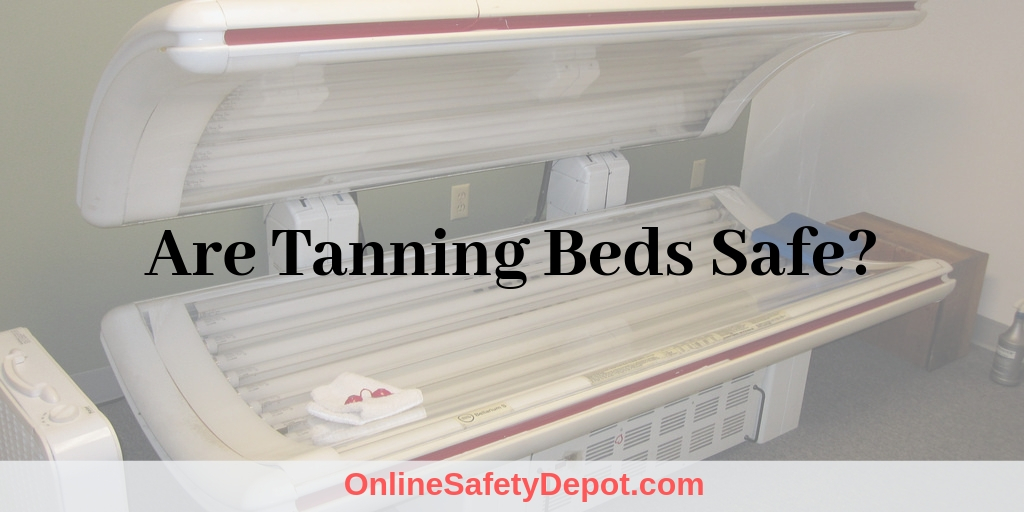 In high school, I had some friends who would go to the tanning salon every week. Occasionally, they would invite me to join them. However, I opted out every time as I was worried about skin cancer because of things I had heard from others, albeit non-medical people. So, are tanning beds safe?

When you’re in high school looking your best is everything. Both guys and girls wanted to look a little darker for the upcoming dance or a winter season Friday night party. This singular focus of wanting to look your best can unfortunately, overshadow any associated risks that are 20-30 years in the future.

According to the CDC, individuals who use tanning beds before the age of 35 increase their chances of developing skin cancer by 75%. Worse yet, skin cancer is not the only thing to worry about when using tanning beds.

Exposure to ultraviolet radiation, whether it is from the tanning beds, sunlamps, or the sun, damages and breaks down the cells in the skin. When human skin is exposed to ultraviolet radiation, which damages the inner layer of skin, the body responds by producing melanin. Melanin is the pigment that makes the skin appear darker. The melanin then moves toward the outer layers of the skin and becomes visible as a darker color of skin, or a tan.

The prolonged exposure to ultraviolet radiation damages skin cells to the point that skin loses its elastic features, loses flexibility, and breaks down causing permanent wrinkles. Additionally, the skin may produce dark spots, rashes or dry patches. These are just some of the mild symptoms that may occur from the use of tanning beds. The real danger from tanning beds is the risk of developing skin cancer.

As the ultraviolet radiation from the tanning bed brakes down the cells in the skin, your body may develop a Precancer or a Cancer.

Precancer
Actinic Keratosis: A rough crusty, scaly growth that is almost invisible to the eye. In the early stages, the Actinic Keratosis is light colored and hard to see. If it is not treated, it will continue to grow, affecting neighboring cells and may lead to Squamous Cell Carcinoma.

Atypical Moles: The features of a atypical mole are similar to that of melanoma. Physicians use the “ABCDE” method for identifying atypical moles that may become melanoma, the deadliest form of skin cancer. The ABCDE’s are:
A. Asymmetry: The shape of the mole is often asymmetrical. If a line were to be drawn down the middle of the mole, the two sides would not be matching halves.
B. Boarder: No clear boarder, the mole may be irregular and fade into the surrounding skin.
C. Color: Different colors may present within the mole.
D. Diameter: Moles that are larger than ¼ inch (6 mm) in size.
E. Evolution: Moles that change in appearance or enlarge over time.

Basal Cell Carcinoma: Abnormal, growths or lesions that arise in the deepest layer of the epidermis skin’s (basal cells).

Melanoma: Known as the deadliest form of skin cancer. If not caught and treated early, the cancer will spread to other tissues and parts of the body. Note: Most often caused by ultraviolet radiation from the sun and the tanning beds. Physicians use the “ABCDE” method for identifying cancerous melanoma moles.

Merkel Cell Carcinoma: Most common in individuals whose immune systems are suppressed and have been exposed to ultraviolet radiation from the sun or tanning beds.

Squamous Cell Carcinoma: Skin cancer that forms in the squamous skin layers of the epidermis and is known as the second most common form of skin cancer. Occurs when there is an uncontrolled growth of abnormal cells from the squamous cells in the epidermis layer. Looks like open sores, warts and may crack and bleed.

Can I use tanning beds sparingly and be okay?

As the saying goes, once won’t hurt… WRONG! Each time you have significant exposure to ultraviolet radiation from the sun, tanning beds or otherwise, your skin is damaged, and the damage is cumulative overtime. In fact, the skin’s response of turning red and then a darker tone is the body’s response to injury.

Bottomline, it is better to protect your skin from ultraviolet radiation exposure (especially if you are fair skinned) by properly applying sunscreen when going out for any extended period of time in the sun and avoiding the tanning beds and lamps altogether. It’s more than okay to look your natural color than to risk developing cancer decades down the road. Also, premature wrinkly skin, regardless of how tan it might be, is not cosmetically pleasing in the mid years of life.  So, you might not have the best tan at the dance, and you may not be considered the coolest guy or girl for that reason – who cares, you will be grateful for healthy skin the rest of your life. You know, when everyone has graduated and moved on with life and any thoughts of who was tan or not has long since withered away in the recesses of everyone’s mind.

Who is at Risk of Skin Cancer?

Everyone can be at risk of developing skin cancer, however, there are some individuals who are more likely to get skin cancer than others. These are the risk factors:

Yes, if caught early and treated before the cancer spreads to other tissues of the body. The medical community is well equipped to treat all forms of skin cancer including melanoma. As with so many health conditions, early detection is vitally important in increasing the odds of a successful treatment.

Previous: Ten Safety Tips to Surviving an Earthquake (That Actually Work!)
Next: What are the Different Types of Wheeled Fire Extinguishers?