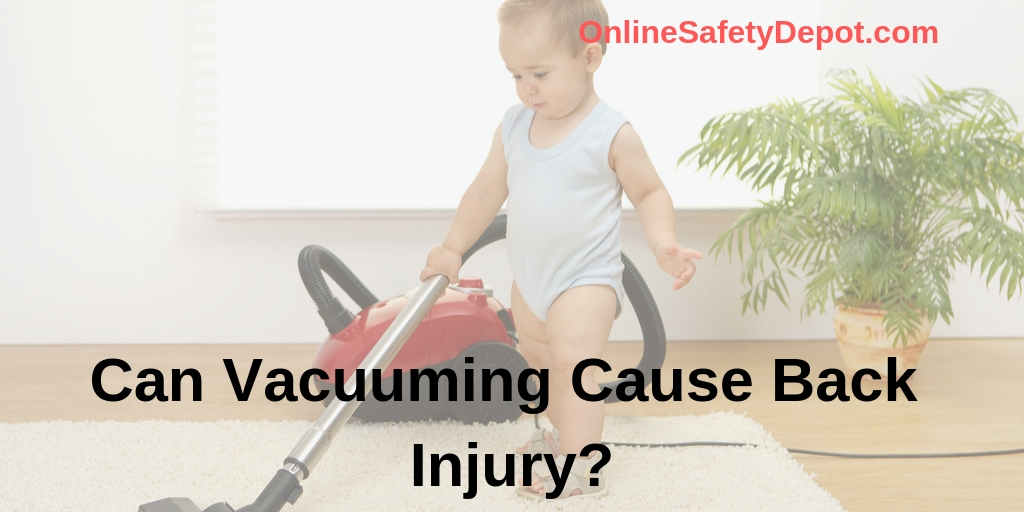 Vacuuming is considered a repetitive action of pushing and pulling. These actions move the vacuum over a surface for the purpose of removing unwanted debris. You and I simply call it sucking up dirt from our carpets. From the perspective of a physical therapist it is a maneuver that extends a lever arm (the vacuum) outward in front of you and magnifies the forces applied to the lower back area. If the repetitive forces that are produced are greater than the low back musculature are capable of bearing overtime, then the tissues in the area can be strained and become injured and inflamed.

The National Safety Council (NSC) reports that the repetitive pushing and pulling action of vacuuming increases the risk of low back injuries. It further reports that back injuries account for just under 50% of all musculoskeletal injuries suffered by janitors in the cleaning industry.

In addition, data reveals that the repetitive motion of vacuuming places janitorial workers at increased risk of work-related upper-limb musculoskeletal injury. This increased risk exists regardless of whether the cleaner uses a back-pack or canister type machine.

What are the unique movement patterns of vacuuming that produce the increased risk for injury, and what modifications to the movement can be made to reduce the risk?

Can speed of movement in vacuuming be a contributing factor to injury?

Whenever speed of a movement is increased the muscle forces of the body that are required to slow down the moving vacuum are increased. This does not mean that the process of vacuuming needs to be slow. We all like to complete this task as soon as possible and be able to move on to something else.

Rather than moving in rapid back and forth movements, slow the process down a bit and create a rhythmic or smooth movement pattern. Any and all jerking movements are eliminated, and the associated stresses placed on the various soft tissues of the body (especially low back and shoulders) are significantly reduced.

Can these same principles be applied to the cleaning job of mopping a floor?

When you consider the repetitive motion of mopping – the repeated pushing and pulling of the mop over the floor – it is easy to see how these motions are similar to vacuuming and therefore would also carry with them the increased risk for both low back and shoulder injuries.

A unique element of mopping, as compared to vacuuming, is that the weight of the mop can change over time depending on the amount of water that is carried in the soaked mop strands. A standard mop typically weighs 1-2 pounds. However, as you add water and chemicals, that weight can increase 2 to 3-fold.

Further compounding the risk is that many if not most mops come in one standard size, yet cleaners come in a variety of heights. This then requires additional adjustments to compensate for a handle that is too short.

Another area in which the work of mopping can increase the risk of back and shoulder injuries is that the movements of wringing out the mop head and lifting and refilling the water bucket, place the same type of strains on the back and shoulder. These are also “repetitive motion” actions and carry with them the same risks.

While learning and applying proper mechanics when performing repetitive motion actions like vacuuming and mopping is extremely important in reducing musculoskeletal injuries, cleaning professionals must condition their bodies to withstand the repetitive forces that are continually placed upon them. Just as the athlete requires a conditioning program to safely and effectively compete in his or her sport, any person whose job requires vigorous physical activity should also engage in a regular training program to harden and prepare their bodies to effectively handle the stresses and strains inherent in the functional aspects of the job. The wonderful side benefit of this is that the worker’s body enjoys the benefits of exercise and the enhanced ability to go and do.

Previous: Is Buying a Metal Detector Worth It?
Next: Standard (BC) Dry Chemical Fire Extinguishers Use, Classification and Model Designs