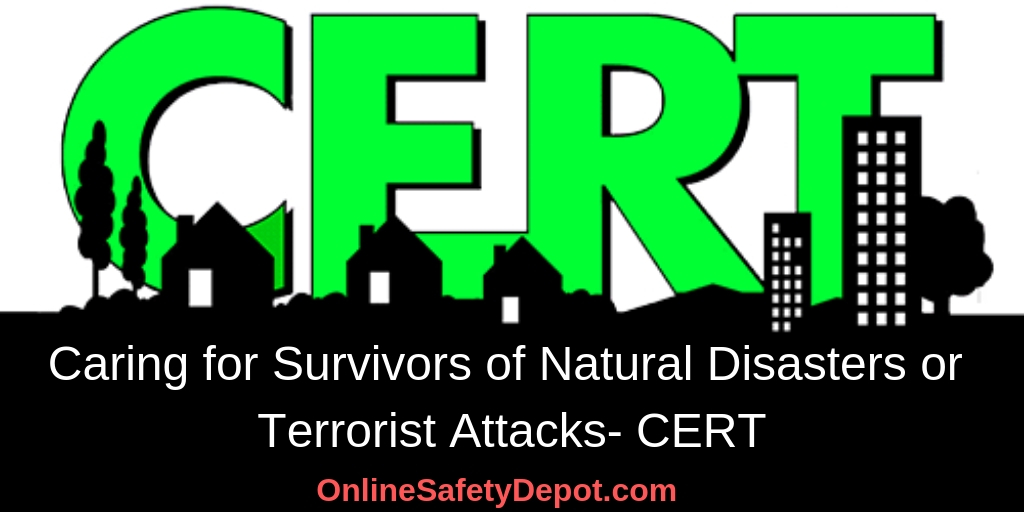 My family and I have been fortunate enough to have never experienced a large-scale natural disaster or terrorist attack. I can only imagine what it would be like to have your home, cars and economic stability destroyed from a natural disaster. Consider that tragedies of the devastating forest fire that destroyed the community of Paradise, California a few months ago, or the destruction left behind after one of the hurricanes that have hit along our eastern and southern shores. It’s hard to contemplate the destruction, heart ache and fear that comes from being a victim of the disasters or the pain of having a loved one victimized from a terrorist attack.

The Community Emergency Response Team’s program (CERT) is designed to train individuals in how to respond to emergency situations such as floods, earthquakes, wild fires and even terrorist attacks that may occur within their own community. CERT members are the first responders to their family, neighbors and community members until professional personal arrive.

In this article we cover the basics to survivor care including intervention for primarily obstructed airway, bleeding, and shock.

An obstructed airway is fatal unless the obstruction is removed and air flow to the lungs is restored. One potential cause of an obstructed airway for an unconscious or semiconscious individual that of their own tongue as the relaxed jaw muscles allow the tongue to move posterior, place on the epiglottis, and obstruct airway.

There may be other reasons for why their airway is blocked such as blood, mucus/saliva, food, or some other foreign object that has become stuck in their airway. It may be hard to tell if an unconscious survivor has a blocked airway, or if an individual is not breathing, but there are some signs and symptoms that you can look for.

Signs
If you find someone who appears unconscious or if they appear to not be breathing, you should first try to wake them up. Gently shake the person (so as not to cause further injury from hidden injuries) and shout for them to wake up. If they do not respond, check for signs of breathing by:

1- Look: Look for the repeated rise and fall of the chest. This movement maybe small and hard to detect, especially in a dark or dust filled room. Another strategy that can be implemented, especially if it is hard to get close to a victim, is to place a mirror next to the victim’s mouth and look for signs of condensation appearing on the glass indicative of moisture from expiration forming on the mirror.
2- Listen: With your ear positioned a few inches from their mouth, carefully listen for the sound of breathing. This too may be hard as the immediate area around you may be filled with sounds such as sirens, commotion, and other typical sounds of being outdoors or in a building.
3- Feel: Depending on the situation, feeling may be the best option. Place your hand gently on the victim’s stomach and feel for any abdominal movement.

Treatment
If the person doesn’t respond and is determined that they are not breathing on their own, try to straighten the airway to reestablish breathing by doing the following these steps:

Bleeding, like an obstructed airway, can be fatal if not properly treated. Uncontrolled bleeding can lead to weakness, shock and eventually death. There are two main types of bleeding, internal and external bleeding. It can be difficult to diagnose someone with internal bleeding unless you are medically trained to do so. External bleeding is easier to assess and treat.

Signs
Blood is transported throughout the body via the arteries, veins and capillaries. Each of the blood transport tubes manifest differently in how they bleed. Being able to tell which type of bleeding it is will help you determine how serious it is and how to go about treating it. 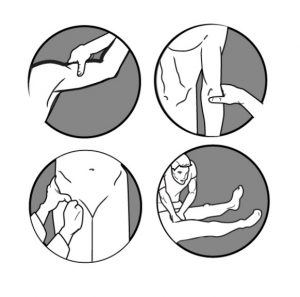 To control bleeding, do one or more of the following.

1- Direct Pressure: Apply pressure directly over the wound with a clean dressing. Note: If you wrap the bandage round a limb, be sure to tie it off with a bow and not a knot. This will allow you to easily loosen the bandage if it is too tight as well as allow you to quickly and easily check the bandage.

2- Elevation: Lifting/elevating the wounded body part above the heart level will help slow the bleeding as the force of gravity helps reduce the blood flow to the wound. Elevation should be used in conjunction with direct pressure.

3-Pressure Point: For arterial bleeds, applying pressure to the actual artery, known as a pressure point, is the most effective means to stop bleeding. While arteries are typically located deep as compared to superficial, being able to effectively apply a pressure directly over the artery is very effective in stopping bleeding. Fortunately, there are places in the upper and lower extremities, where an artery crosses over a bone, providing a location that you can apply pressure causing the artery to be compressed against the bone to stop the bleeding. See image for pressure point locations.

Shock is a disorder that results from the ineffective circulation of blood. Prolonged shock can lead to death of cells, tissues and even entire organs.

Signs
A person experiencing shock may display one or more signs, all of which are indicative of oxygenated blood flow that is not sufficient to sustain these tissues and organs. They include:

Treatment
Shock is a serious condition that will lead to death if not corrected quickly. Interventions include:

Hopefully you are never in a situation that requires you to preform these actions. However, knowing what to do and how-to best help others in their time of need is what the Community Emergency Response Team’s program is designed to teach you and help you feel confident in performing. I highly recommend taking the course and then would encourage your leadership in your community.