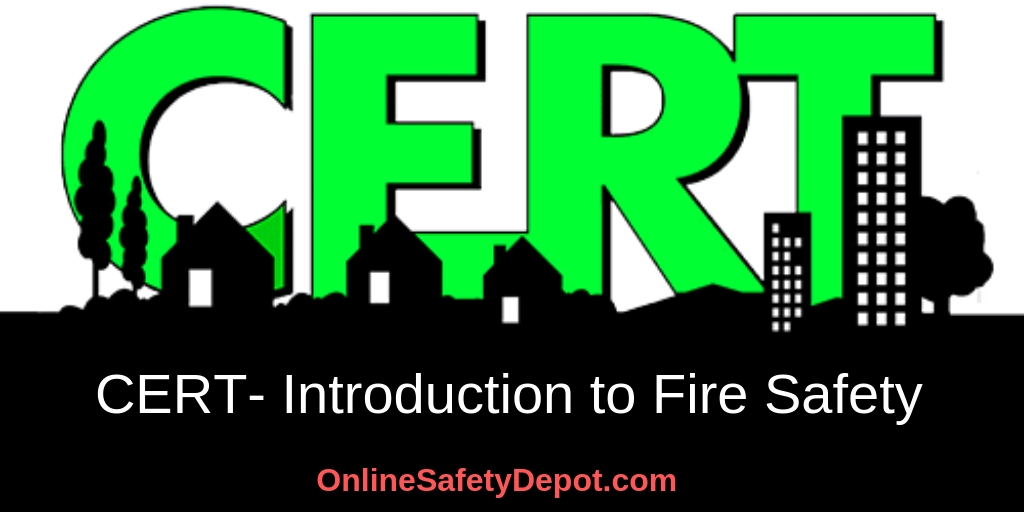 Fires are a common hazards for both residential homes and commercial businesses around the country. Each year, thousands are injured and some killed from fires. Because of this, fire safety is a major aspect of the Community Emergency Response Team’s program. If a fire is caught early enough, homeowners or workers are able to extinguish the fire quickly before it can cause significant damage or injury/death.

As a CERT member, you will learn the following:
1- What the Fire Triangle is
2- The five different classes of fires and what fuels them

Before we can recognize potential fires, we need to understand what makes a fire burn. For a fire to burn or stay “alive” it needs to have three  elements. They are: Fuel, Heat & Oxygen. This three elements together make up the “Fire Triangle”. All three elements need to be present in order for the fire to continue to burn.

Fuel: The material that is actually being burned. It could be one of three things, Solid, Liquid or a Gas. For example:
a- Solid: Wood, paper, or some other solid material.
b- Liquid: Gasoline or oil
c- Gas: propane or methane.

Heat: Temperature that rises to its ignition point. No heat, no fire.

Oxygen: There must be enough oxygen in the immediate area to support a combustion and maintain the fire.

Of the three elements to the fire triangle, the fuel source is the most important element to consider when extinguishing a fire. The reason for this is because the type and the amount of fuel being burned determines the classification of the fire and therefore the type of fire extinguisher that needs to be used to effectively extinguish the fire.

There are five classes of fire, they are: Class A, Class B, Class C and Class K. To properly and safely extinguish the fire, you’ll need to use the correct fire extinguisher for that type of fire.

You may also be interested in our other article titled, “Types of Fire Extinguishers and Their Uses”.

The FEMA’s Community Emergency Response Team’s program teaches you some firefighting resources to help you when dealing with a fire.

2- Interior wet Standpipes: Water filled pipes that can deliver up to 125 gallons of water per minute. It often takes 2-3 individuals to man the Wet Standpipes. Often found in commercial buildings or apartment complex buildings.

3- Confinement: If a fire is too large or out of control, you’ll want to confine the fire. This is more of an action that helps minimize the fires ability to grow until professional firemen and women are able to arrive and extinguish the fire. By closing doors and windows you restrict the spread of the smoke and heat from going to other parts of the building. Additionally, you will be restricting the oxygen from fueling the fire more.

4- Creative resources: You may not always have a portable fire extinguisher handy and will require to be a little more creative in how to maintain or extinguish the fire. For example: you may need to use a garden hose, buckets of water from the swimming pool, or sand/dirt with a shovel.

If you decide to attempt to extinguish the fire, take a second and ask yourself the following questions. If the answer is ever NO, leave the area immediately and go to a safe place where you can call 911.

Remember, if the answer is NO to any of the above questions when accessing whether to extinguish the fire or not, leave immediately and go to a safe place where you can call 911.

Whatever you do, your safety and others are the most important aspect to consider.

Previous: Things You Should Know About Pepper Spray
Next: CERT- Electrical Fire Hazards in the Home and Workplace