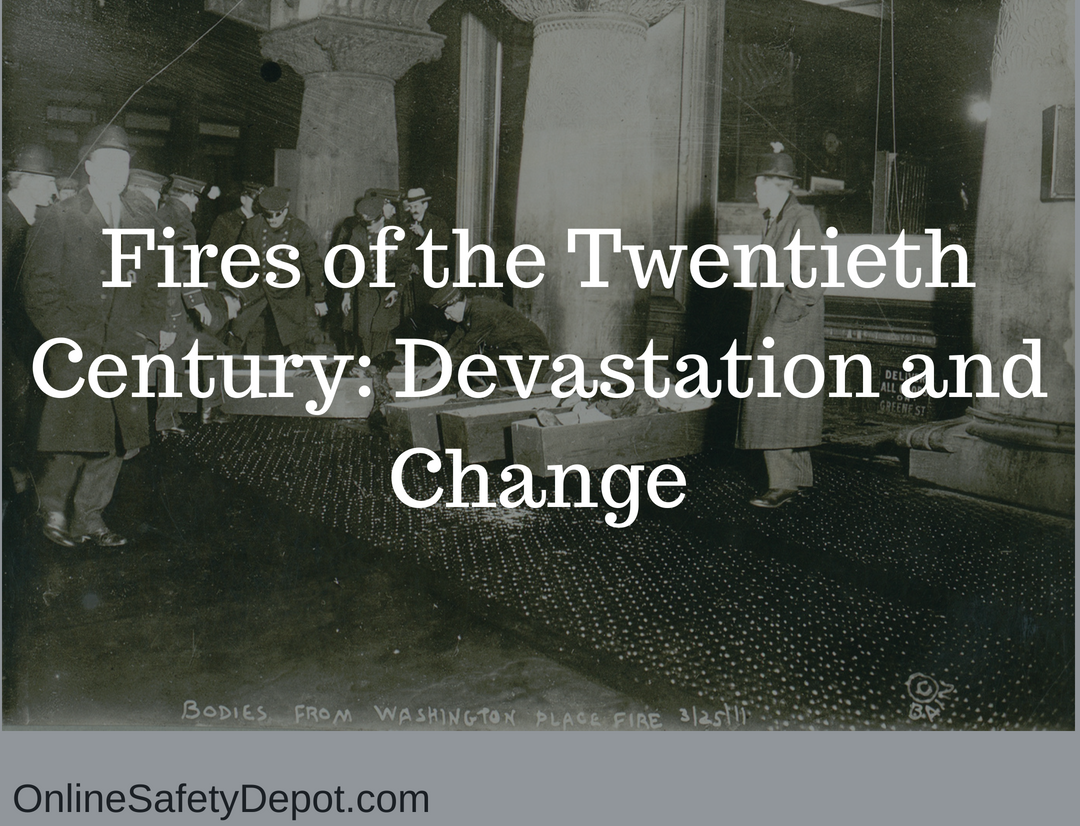 Fires of the Twentieth Century: Devastation and Change

During the twentieth century several large-scale fires resulted in significant loss of life and property, most of which can be contributed to a lack of fire prevention and safety regulations. Subsequent investigation into the cause of these fires and why so many people died yielded knowledge that lead to the development and implementation of regulations designed to reduce the occurrence and magnitude of fire disasters.

Hoboken, New Jersey Port Fire – June 30, 1900
The first notable large-scale fire disaster of the twentieth century was the Hoboken, New Jersey Dock Fire June 30, 1900. The death toll from this fire is listed as 326 consisting mostly of sailors and other dock workers and a few women who were visiting one of the docked ships. The fire began when cotton bales stored in the Norddeutscher Lloyd shipping company (NDL’s) wharf caught fire and spread to adjacent structures where volatile substances, also being stored on the all wood pier, caught fire and exploded leading to a cascade of fires that engulfed the piers, nearby warehouses, three of NDL’s docked transatlantic liners and other nearby ships.

As a result, NDL’s replaced its Hoboken wooden piers with larger, stronger, more fireproof steel structures. In addition and owing to news reports of below-deck crew members of burning ships trying to squeeze through portholes, small circular windows used in the hull of ships to admit light and air, to escape the burning ships lead to discussions that the portholes should be enlarged. While there were arguments against the proposed regulations related to it being cost-prohibitive and the potential to compromise the ship’s structural strength, regulations were passed requiring that the portholes be big enough to allow for a person of reasonable size to escape.

It is believed that the Chicago, Illinois Iroquois Theatre Fire of 1903 was initiated by a stage light that sparked a backstage fire, but the devastating loss of human life from the fire is attributed to the lack of a fire-safety plan (no fire alarm or sprinkler system over the stage), blocked and locked exits, and failure to execute common sense measures of fire prevention and protection. Even the supposed fire-proof asbestos curtain separating the stage from the audience that was to be lowered in case of a fire failed in its attempted deployment. Even worse is that it was later determined that it was not made of asbestos, but rather a paper-based flammable material.

Of the nearly 2,000 patrons in the theatre at the time of the fire, 602 died. This mass casualty inspired federal and state overhauls of codes that affect public spaces, many of which continue to govern our theatres and other entertainment venues where large numbers of people are gathered. After the fire, panic bars were introduced to make emergency exits more accessible, maximum seating capacities were enforced to prevent crushing crowds, ventilation standards were changed to prevent fireballs and smoke buildup, and numerous regulations were passed to ensure that buildings have clear pathways, clearly marked exits, and doors that are unlocked and easy to open.

New Your City Triangle Shirtwaist Fire – March 25, 1911
Another very preventable fire that claimed the lives of 147 people began in a clothing factory from a single rag bin fire started by a dropped cigarette. The Triangle Shirtwaist Company occupied 3 floors of a 10-story building and employed nearly 500 workers, most of which were immigrants and women and an average age of 21. At that time, regulations required that only buildings that were 11 or more stories be built with metal window frames and stone floors; as such the building had neither of these requirements. Furthermore, there were very few fire safety regulations in place. At the time it was common practice for workers to toss scrap fabric on the floor which was not removed regularly and accumulated in thousands of pounds of rages before removal. Previous warnings from fire insurance inspectors about company policy of keeping doors locked during hours of operation, expansion of narrow aisles, removal of partitions between doors and elevators, and the recommendation that regular fire escape safety drills be instituted were ignored. Efforts to fight the fire were hampered by fire truck ladders that were too short.

Ohio State Penitentiary Fire – April 21, 1930
The Ohio State Penitentiary was billed as a “fireproof” structure when it was built. However, during renovations in 1930 a single candle came in contact with a lethal combination of leftover oily rages and wooden scaffolding to initiate a fire that ultimately destroyed much of the prison killing 322 of the 4,300 prisoners. As with so many previous large-scale fires, inadequate fire regulations, lack of compliance with current regulations, and poor building practices involving the use of combustible materials in construction, contributed to the extent of property damage and loss of life.

In the aftermath of the fire the city immediately began an overhaul of its prison and fire safety regulations. Fire resistant materials would be required in building of all correctional facilities, mandatory installation and inspections of fire detection systems and sprinkler systems would be required in jails and prisons. Overcrowding concerns led to the establishment of the Ohio Parole Board the very next year. This Board over saw the releases of thousand of prisoners, and the repeal of minimum sentencing laws that had inflated the prison populations for non-violent offenses.

It is sad and unfortunate that so much loss of life and property damage had to occur to initiate the momentum that has led to the development of multiple fire safety regulations. The general public owes a debt of gratitude to those who have diligently sought to develop new materials and processes in construction of structures and to those who have worked to enact fire safety regulations that provide great preventive protection.