Skip to the content
Need help? Call us or text us: (480) 818-9373‬
Purchase Orders | Resources | Newsletter
Login / Register
0Cart $0.00
0
Search
Follow Us
Home » Blog » Uncategorized » How to Prepare for an Approaching Tornado 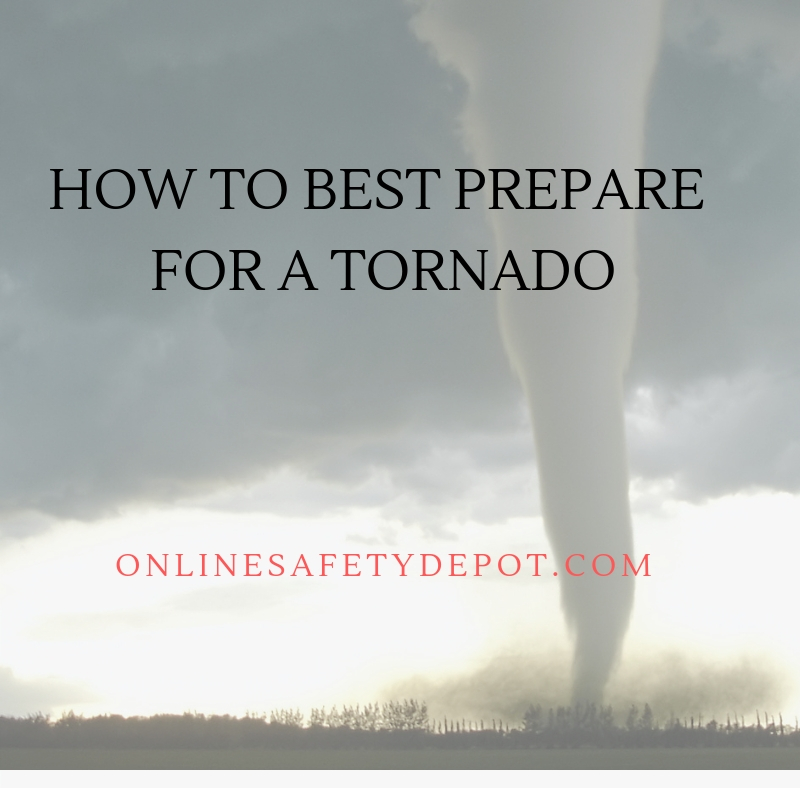 Of all the things you can or should do to prepare for an approaching tornado, the most important is to find shelter in a cement walled basement room or storm cellar of a structurally sound building that has no windows, is free of or has minimal items that could become wind driven projectiles, and has secured parts or fixtures to which you could secure yourself. If such a room does not exist in your home or nearby location, then the lowest and most centrally positioned room of your home should be your choice and getting as far away from the door to that room is pertinent.

If you live in a mobile home, it is better to seek shelter in your vehicle than to stay in your mobile home. Assuming that you can’t flee from the tornado when in your vehicle, buckle up, bend over so that your body, and especially your head, are positioned below the level of the window, and wrap your head and neck area with as much clothing as possible and secure in place with your own hands. It is also recommended to keep the vehicle running. Contrary to popular belief, seeking shelter under an over path or bridge is not recommended.

What is a tornado?

A tornado is a column or funnel of violently rotating air that originates and extends from the clouds of a thunderstorm down to the ground. These violent storms form when warm, humid air collides with cold, dry air, and can be accompanied by large size hail, rain, and even lightning. It is the extremely high wind speeds, reaching top speeds of over 250 miles per hour, that are so devastating. This intensity of wind is capable of uprooting trees, flipping vehicles, destroying buildings, and sending all manner of debris flying through the air, capable of destroying or damaging anything in its path, most importantly human life. That path of destruction can be a mile wide and up to 50 miles in length.

Tornado’s are mostly unpredictable, but specific weather conditions are associated with a greater chance of spawning a tornado and meteorologists can identify when those conditions are present or likely to develop. As such, knowing how to access and monitor the Emergency Alert Systems (EAS) and National Oceanic and Atmospheric Administration (NOAA) Weather Radio for emergency announcements is essential. Key information that will be distributed from these agencies include:

Where in the United States are tornados most likely to occur and when?

The midwestern states seem to be most prone to experiencing a tornado. “Tornado Alley” is the term given to this area Oklahoma, Kansas, Missouri, Nebraska, Iowa, and South Dakota. Of course, tornados have occurred in areas/states other than these listed. In fact, Texas currently has the highest number of tornados per year, and Alabama ranks third. Living west of the Rocky Mountains is the safest place when tornados are concerned. The annual financial damage caused by tornados in the United States each year is around 400 million dollars, and the human death toll is about 70 people on average.

Between the months of March and May is when the majority of tornados occur in the southern states. It is during the summer months that most occur in the northern states. However, tornados have occurred in most states at some time or another. A tornado is most likely to occur between the hours of 3 p.m. and 9 p.m. when the temperature near the surface is generally at its highest due to the warmth of the sun during these times rising to mix with the cooler air temperature of the atmosphere.

As with all emergencies there are several preparatory measures that should be taken to ensure the best possible outcome in the case disaster strikes. One such measure, which I think is the most important measure you can take is to have an adequate tornado shelter to go to. There are several different tornado shelter models on the market today with two main designs, Above ground and Below ground shelters.

Here are some shelters, both above ground and below ground that we have read good reviews and article about.

Above ground:
Note: All units above ground need to be properly anchored to a tough durable foundation per manufactures approved specifications.

Below Ground:
Note: All units below ground need to be properly buried and anchored to a tough durable foundation per manufactures approved specifications.

Your home, cars and shelters should be supplied with emergency kits. These kits should include food, water and other items that will help you during and after the tornado hits. Its important to note that these emergency safety kits can be used for any emergency, flood, hurricane, tornado, earthquake or any other natural and man made disaster. These are our top three emergency kits we recommend based on reviews and items included in the kits.

Because tornado’s can occur at any time, being properly prepared for a tornado may just  save your life.  Have a plan, know what to do and where to go, proper emergency supplies and know where to go after the tornado has hit should all be a part of the plan.

Previous: Safety at the Gas Pumps
Next: Getting Prepared for Emergencies