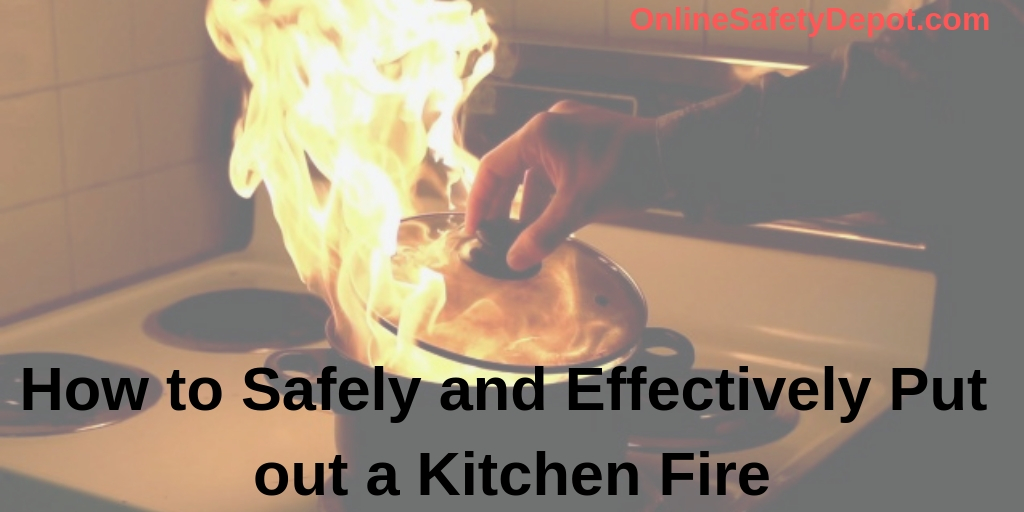 I’m not the best cook… Well, unless it is in the microwave. Whenever my wife is out of town and I try to cook, I end up burning the food. One of these days my luck is going to runout and I’ll start a fire in the kitchen.

Kitchen fires are extremely dangerous and are usually classified as a Class B fire which can grow into a class A fire once it has spread to other parts of the kitchen. To extinguish a kitchen fire, use one of the following: 1- Fire Extinguisher, 2- Pot or Pan Lid 3- Baking Soda.

To learn how to properly extinguish a fire using a fire extinguisher, read our other article entitled, “How to Operate a Fire Extinguisher”.

2- Cover Pan or Pot with a Lid. If you do not have a fire extinguisher, the next best option is to cover the pan with its lid. This will restrict the oxygen to the fire. Once there is no more oxygen for the fire, it will burn out and be extinguished.

NOTE: Never pour water on a grease/oil fire. The grease or oil doesn’t mix well with water and will cause the fire to spread to surrounding areas in the kitchen.

The reason why the options above are able to extinguish the fire is because the chemical reaction for FIRE, known as “The Fire Triangle” needs three things, they are: Heat, Fuel, and Oxygen.

Fire extinguishers, baking soda and a tight sealed lid work to extinguish fires by removing one or more of these elements. If you take any one of the three elements away the chemical reaction (Fire) will be extinguished.

Class A Fires
Class A fires are those whose fuel sources is typically wood, paper, cardboard, or regular household trash. Class A fires are extremely common and can occur in the home, workplace, and various public settings.

Class B Fires
Class B fires consist of the burning of flammable liquids or gasses. Class B fires are common in the kitchens of homes where grease and cooking oils may catch fire. If this is the case, DO NOT THROW WATER ONTO THE FIRE as it cannot extinguisher Class B Fires.

Other flammable liquids and gasses that are considered fuel for Class B Fires include petroleum greases, oil-based paints, tars, alcohol, and some solvents.

Class C Fires
Class C Fires consist of “energized electrical equipment.” Examples of Class C fires are those that occur in electrical outlets and cords, home appliances, electrical panel boxes, computers, servers, motors, power tools, and any other source that may be energized or electrical.

To ensure your safety and the safety of your family members, we highly recommend you equip your home with other fire safety devices. Below are some great products every home should have.

Smoke Alarm: Designed to alert you and others of a possible fire when it detects smoke.

Fire Blanket: Used to extinguish fires that catches onto a person’s clothing or some other object.

Escape ladder: Used in homes that have a 2 story level above the ground. It simply hooks onto  window’s edge and rolls out creating an escape route for anyone who may be trapped in the upper level.