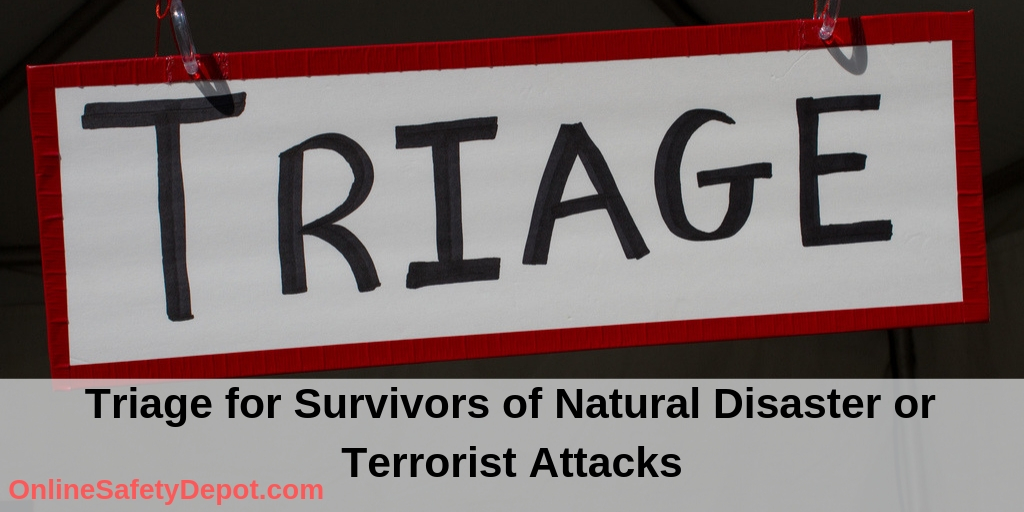 In another article titled, “Caring for Survivors of Natural Disasters or Terrorist Attacks”, we covered the signs and treatments of the three major life-threatening conditions a survivor may experience as a result of injury from a natural disaster or terrorist attack. They are: obstructed airway, excessive bleeding, and shock.

The degree of severity of an injury or condition combined with situations in which the number of injured may exceed the number of rescuers, and where resources are usually limited, represents the scenario where triage is needed. Triage is defined as “the assignment of degrees of urgency to wounds or illnesses to decide the order of treatment of a large number of patients or casualties.”

Being able to properly assess the extent of injuries to a victim and accurately hierarchy the need for medical care for survival, and then get them proper help within the needed timeframe is potentially a situation of life or death. For example, a patient who has a “spurting” arterial bleed will need to receive immediate care, where as a patient who has only a venous “oozing” bleed can wait longer for treatment and still have a favorable outcome. In the aftermath of a natural disaster or terrorist attack, it is fellow uninjured or less injured survivors and CERT trained individuals who will likely be the first upon the scene.

Their ability to establish a system of triage to prioritize the injured victims according to the severity of help they need can make a significant difference for when trained medical personnel arrive at the scene.

The Process of Triage

After a disaster, natural or otherwise, the process of triage should begin as soon as possible. Begin with a head-to-toe assessment with the most important injury identifications being that of airway obstruction and breathing, excessive bleeding and circulation, and shock which includes mental status of the victim. As you triage the victims according to degree of severity, the victims should be ranked or placed in a category based on your assessment findings. The four triage categories are:

As with all emergency situations where individuals answer the call for help to aid those who are in need, whether those individuals be fellow survivors, CERT trained persons, or first responders, the guideline to be aware of your surrounding and circumstances mandate that you ensure that you are protected from becoming a victim yourself. This includes avoiding unsafe situations and hazardous materials and wearing your personal safety equipment (gloves, goggles, dust mask, helmet, boots, etc.).

Special precautions should be taken while performing triage or treating survivors such as wear sterile gloves and changing gloves between working n survivors. The protective barrier offered by gloves are to help prevent the transmission of any diseases the victim may have to rescuer.