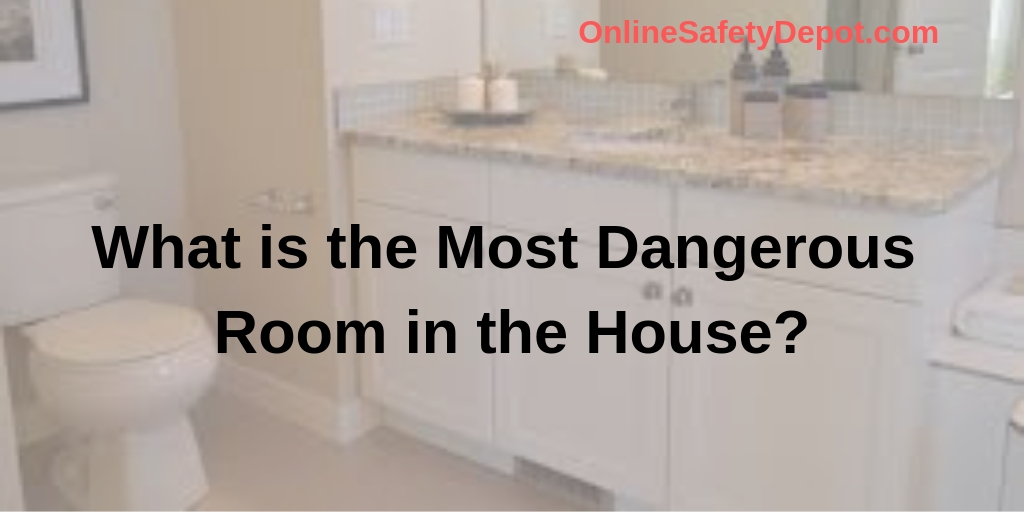 The home is known as the safe haven from the world. It’s a protection from the storm and  dangers of the universe. However, there’s one room in the house where dangerous accidents regularly send people to the hospital more than any other room in the house. Take a visual tour through your home- which one would you think is the most dangerous?

Research shows that the Bathroom is the most dangerous room in the house. According to the CDC (Center for Disease and Prevention) in 2008, nearly 22 million Americans ages 15 and older were injured in some way or another while in the bathroom. Of those injured, 235,000 required a trip to the ER.

Why is the Bathroom the Most Dangerous Room in the House?

Sure the kitchen is full of knives, hot pans and other cooking equipment that can cause injury to individuals of all ages but it doesn’t have the most dangerous element of all: slippery surfaces. The common “Slippery when wet” sign could send a warning for every bathroom in the house. Between the tub and the floor when you get out of the tub or shower, both are a common places for falls.

It doesn’t matter what age you are, a fall on a slippery surface will sent you to the floor before you are able to catch or brace yourself.

Where in the Bathroom?

Where in the bathroom do we need to be the most careful? The bathtub /shower is the most common place for individuals of all ages to be injured. They either slip and fall while in the tub or when getting out of the shower/tub onto a flat surface that is slippery from the water.

The second most common place for injuries in the bathroom is the toilet. This one surprised me. The study states that accidents that occur at the toilet are when they are either standing up from the toilet or when they go to sit down on the toilet. These injuries are both from slipping and from straining a muscle. Personally, I think my pride would be the worst thing damaged at the toilet and I would just tell the doctor that I slipped while getting out of the shower.

Safety Tips and devices for the Bathroom

There are some simple tips and inexpensive devices to help avoid an injury while in the bathroom – specifically fall preventions.

1- Clean your Tub:
Most bathtubs today are made with a non-slip surface, but over time the surface collects soap, mildew and bacteria that can make the tub or shower area extremely slippery. To keep the grippy surface on the bottom of your tub, be sure to clean it at least once a month.

2- Tub Mats
It is highly recommended that you put some tub mats down in the bath tub for additional traction to prevent falls. Bath mats are inexpensive but highly effective in adding traction while you are showering or bathing.

3- Mats on the Floor

Having floor mats in the bathroom for when you step out of the shower will minimize the amount of water that gets on the floor. Be sure that the mats are made with rubber or another gripping material that will not easily slide when you step onto it or if water gets under the mat.

4- Dry Yourself Before Getting Out of the Shower or Tub

During hot showers, the steam needs to either be vented out of the room by either a fan or by opening the bathroom door. Otherwise, the steam and water vapers will coat over everything in the bathroom, including the floor making it extremely slippery.

Regardless of your age, having something to grab onto and support yourself while getting into and out of the bathtub or shower is extremely helpful. There are several different types and models on the market today. One design is permanently installed to the wall while the other uses suction cups to hold onto the wall.

The suction design requires the surface to be flat and  smooth. Otherwise it will be unable to properly adhere to the surface. Whether you chose the permanent handle or the suction design, having one to grab onto will be extremely helpful and will greatly reduce your chances of slipping while you are getting out or into the shower or tub.

Conclusion
The bathroom is the most dangerous room in the house due to the several factors. However, by slowing down and consciously utilizing the tips and inexpensive devices mentioned above, you can help protect yourself from falls or other injuries that are common in the bathroom.

[author] [author_image timthumb=’on’][/author_image] [author_info]Trevor has been with Online Safety Depot for the past year. He has experience working in both the public and private sector. He is a father to three wonderful kids who keep him busy when he is not working and a beautiful wife who is his best friend and supporter in life. He enjoys hiking, camping and fly-fishing in Yellowstone National Park and its surrounding wilderness. [/author_info] [/author]