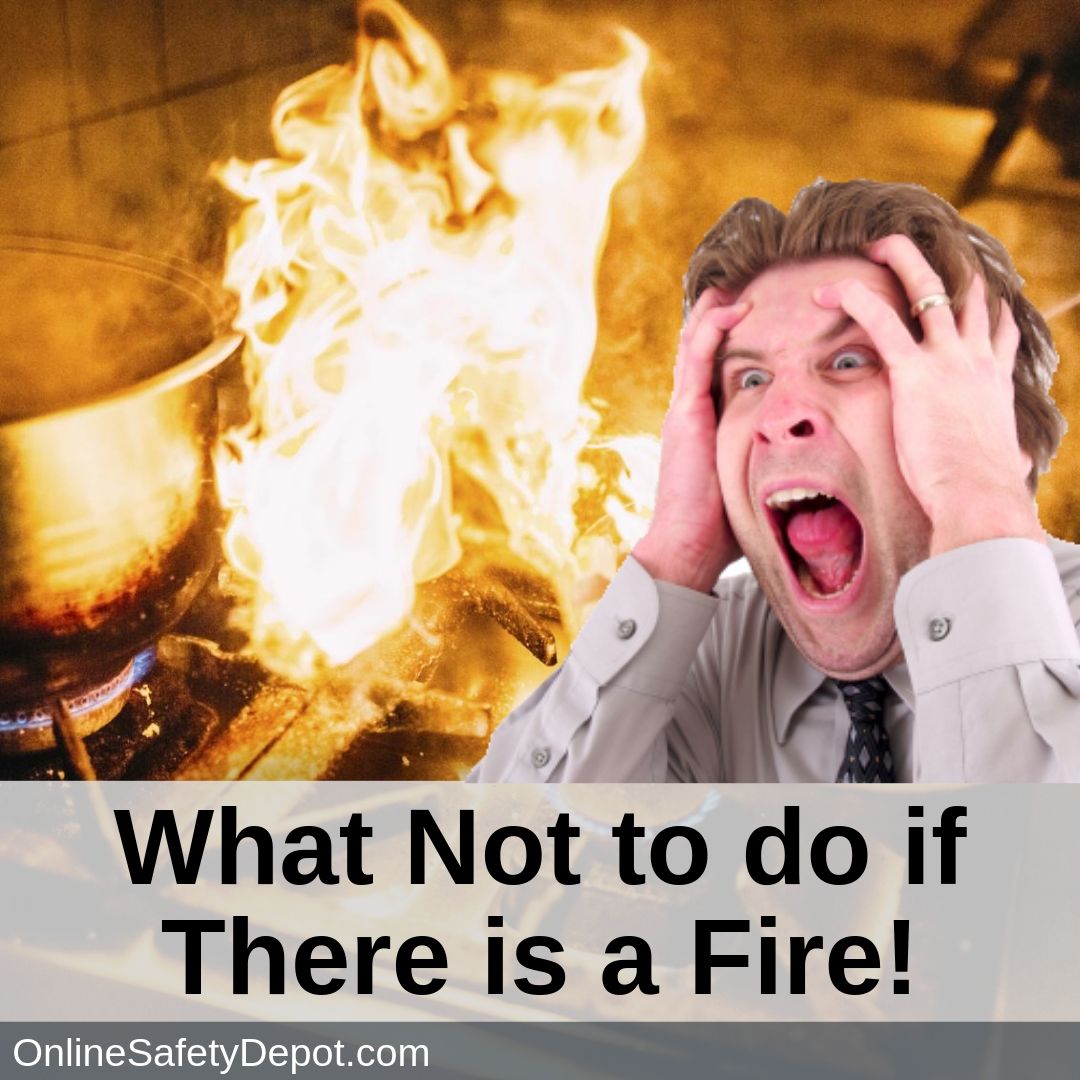 Have you ever been in the kitchen and had a washrag or other piece of kitchenware material catch fire, or maybe even the food you are cooking? I have, and it is a bit of an adrenaline rush! Your mind starts to race, and your brain starts sending so mixed signals as to the best way to handle the situation… At least that was the case for me when I was 10 and placed a small hand rag on a hot stove and it quickly caught fire. As I was telling my kids this story and what you should never do in the event of a fire, I decided to write my top 10 things no one should do in the event of a fire.

NOTE: Some of these are a bit silly, but as I read the news about some of the choices made by a few of the rising millennials, (Eating Tide Pods, Bird Box Challenge) I thought all is fair game and that this could be a perfect article to offer some helpful advice.

So, what should you not do if there is a fire?
1- Take a selfie
2- Update your status (Social Media)
3- Throw water at an oil or grease fire
4- Spend time collecting family photos or Heirlooms or other important documents
5- Play hide and seek from the fire
6- Try to extinguish an out of control fire yourself
7- Quickly call the insurance company and sign up for fire insurance
8- Know where your fire extinguisher is located
9- Read the back instructions of how to use the fire extinguisher
10- Use the Wrong Type of Fire Extinguisher

If you have read up to this point and still have some curiosity as to why these things were included in the list, allow me to explain a little as to why each of these was included.

Take a Selfie
While I consider this a silly one to add to the list, I was surprised and somewhat alarmed to see some of the selfies people have taken while in dangerous situations. When a fire breaks out, whether in your own home or while in a public building, taking the time to snap a picture or film the incidence can put yourself in danger and maybe also those around you who may look to you for help and guidance in responding to the emergency situation.

Because seconds matter in the event of an unexpected fire emergency, your focus needs to be on assessing the situation and making the decision as to if the fire could be effectively dealt with using a fire extinguisher (assuming you know where it is located) or if evacuation is the only logical and safe action to take. Based on your analysis and decision made, the execution of that decision must now take priority.

Update your Status (Social Media)
I know, sounds preposterous to even think that someone would update their social media status, but as mentioned above, bizarre things have happened and because they have happened, an article has appeared highlighting the foolishness that resulted in an unfavorable outcome as the delayed response proved to be very costly, to both person and structures.

Rather than either of these previously outrageous events being allowed to occur, quick response to obtain a nearby fire extinguisher is where those precious seconds should be spent.

Throw Water at an Oil or Grease Fire
I’m sure you have seen it, a YouTube video of a person pulling a burning pan from the oven or cooking with oil or grease on the stove when a fire suddenly erupts, sending flames into the air and causing the individuals in the kitchen to panic. Rather than placing a lid on the fire to deprive it of oxygen to cause it to become extinguished, they pour water on the fire which results in the fire being splashed to cover an even greater area and reacting rather aggressively by sending flaming oil onto the countertops and cupboards.

If you would like to learn more about what to do in the event of a kitchen fire, read our other article titled, “How to Safely and Effectively Put out a Kitchen Fire”.

Spend Time Collecting Family Photos, Heirlooms or other Important Documents
While these articles are precious to all individual family members, spending time collecting them and thus placing your life in jeopardy is an unwise decision and unfortunately, has been made by more than a few homeowners. I assume they are making the reasoning that their entire lives of memories are packed in the storage room down in the basement or closet. Objects can be replaced, loved ones cannot. Spend whatever amount of time you have getting yourself and those loved ones out of the home safely.

You may want to consider investing in a fireproof lockbox for your truly valuable documents and other items, or an online photo storing service to ensure that you do not lose those precious keepsakes. Below are some great options for fireproof boxes and web-based file storage options.

Play Hide and Seek From the Fire
Regardless where you hide, an out of control and unchecked fire will eventually find you. If you truly have no escape, and they’re literally is no other options available to you, an alternative but risky option is to fill the tub with water and immersing yourself as possible. However, you will not only be risking the effects of the heat of the fire, but also its associated smoke.
When a fire breaks out, get out of the building as soon as you can and call 911.

Quickly call the Insurance Company and Sign up for Fire Insurance
OK, so this is thrown in here to encourage all to either review our fire insurance policy to see if it is up to par with the value of your home and possessions, but also to strongly encourage those who do not have sufficient home insurance to get it – before the unthinkable happens and the time to take care of this important “to-do-item” has passed. Some insurance companies require you to be enrolled in their plans for at least 3 months before they will cover damage due to fire. So, either review your existing insurance to ensure sufficient coverage or get the coverage and enjoy a little peace of mind knowing you are protected.

Know Where Your Fire Extinguisher is Located and How to Use It
If a fire were to break out right now, would you know exactly where your fire extinguisher is located? Has it been inspected within the past month or even year? How hard would it be to get to it? These are questions you should ask yourself as a homeowner well before a fire starts.

If the fire extinguisher doesn’t work then it is useless, even if readily available. If you are unable to reach it promptly because it is in a high cupboard or behind several boxes, cups or bowls, you may not be able to extinguish the fire quick enough before it grows beyond the fire extinguishers capabilities.

Fire extinguishers need to be inspected at least once a month by the homeowner. Ensure that the tamper seal is still intact and that the pressure gauge is pointed in the green zone indicating that the extinguishing agent is occupying the canister and ready for use. A professional fire extinguisher inspector should inspect the fire extinguisher and reservice it every 6 years.

Read the Back Instructions of How to Use the Fire Extinguisher
Learning how to use a fire extinguisher should be an exercise and ongoing event for all capable family members. A fire can take over the kitchen in a matter of minutes, certainly faster than you can read all the instructions on the back of the fire extinguisher.

Learning the P.A.S.S. method is extremely important and will help you properly and effectively extinguish the fire. To learn more about the PASS method, read our other article titled, “How to Operate a Fire Extinguisher”

Previous: Fire Extinguisher Tamper Seals: A Complete Guide
Next: Safety Tips for Living in the Country