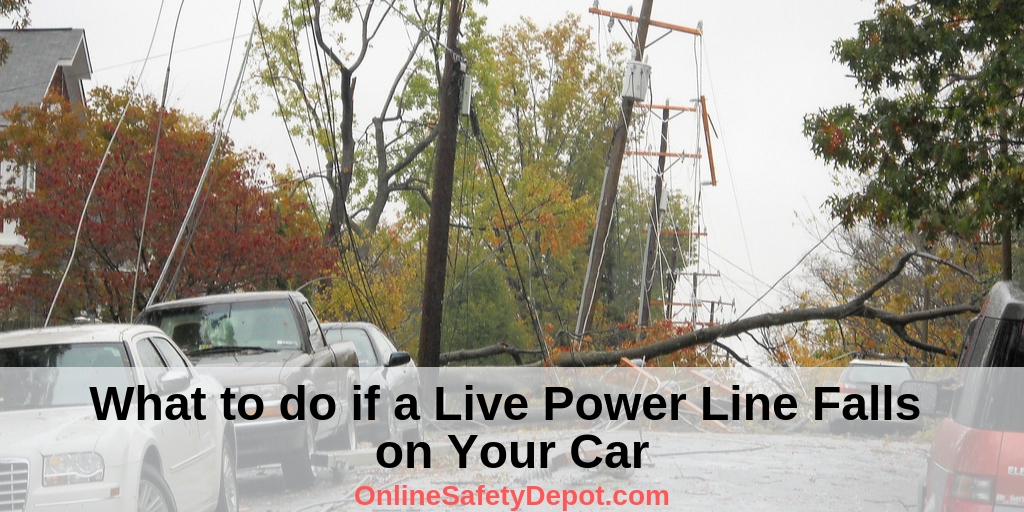 Years ago while I was driving down the road I noticed a bunch of police cars, ambulances and utility company vehicles parked around a car that had run off the road and crashed into a power line pole. As we were directed away from the crash by one of the police officers, I noticed that the car had live wires laying on top of the car. There was a utility repairman standing roughly 20-30 yards away from the crash site and he was shouting directions to the driver who was still in the car. I don’t know what ever happened to the driver nor the passengers that were in the car, but I do know that would be a scary situation to be in.

Crashing into a power line pole is not the only way to have a power line fall onto your car. For example: Earthquakes, hurricanes, floods, explosions, and wind storms that result in a falling branch from a tree that severs the power line could also put you in the same predicament.

What should you do in this situation? What should you do if the car is on fire and you need to escape the burning car but the wires are still on the car? What if you aren’t alone and have kids or friends in the car? Live wires and exploding cars seems like an everyday occurrence in the movies but in real life- what is the best way to stay safe?

Live Wires on Your Car

Should you ever find yourself in a situation where a live wire is on your car it is extremely important that you do the following:

When deciding whether you should exit the car or not, remember, the only time to leave the car is if the threat of not leaving is greater than the risk of staying. I believe it is fair to say that if you need to hit the restroom really really bad, you should still stay in the car.

If it is decided that you need to leave the car, follow these tips.

Being in a situation where you and your family are at risk of electrocution can be extremely stressful and scary! Try to relax and listen to directions from the first responders to escape the situations safely. If necessary, follow the steps outlined above to exit the vehicle safely.

Previous: Dangers of Using a Cell Phone
Next: 3 Ways your Fire Extinguisher Could fail, and How to Prevent it