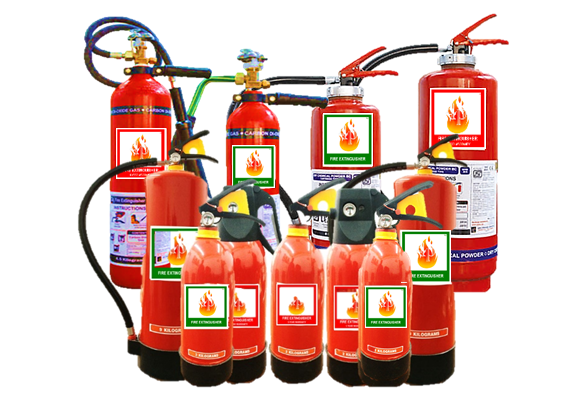 TYPES OF FIRE EXTINGUISHERS AND THEIR USES

Not too long ago, while at a construction store picking up supplies for a mini cabin I was building at the time, I overheard a young couple talking about which fire extinguisher they should buy. After a short glance at the prices, they opted for the small 2.5oz fire extinguisher and were off to get more supplies.

The Fire Triangle
Before we dive into the 6 different types of fire extinguishers, we need to understand the Fire Triangle. To start and maintain a fire there are three needed elements. Those elements are heat, fuel and oxygen.

If you take one of the three elements away the chemical reaction (Fire) will be extinguished.

Water extinguishers are used only on Class A fires, where the source of fuel is wood, paper, cloths, trash, or other such items. You should never use a water extinguisher on Class B, C, D or F fires because of its electrical conductivity and inability to mix with and create a barrier between oil or gas. Water fire extinguishers work by removing the heat from the fire.

Water Extinguishers have two designs: Stored Pressure and Pump.
The stored pressure extinguisher operates by breaking the tamper seal and pulling out the safety pin with a squeezable handle located on the top. With one hand on the hose and the other hand on the fire extinguisher handle you squeeze the lever, point the nozzle and discharge the agent.

The pump pressure extinguisher comes in two different styles: the floor standing model and a backpack model. Depending on the size of the fire extinguisher, the volume of the extinguisher is between 7 – 25 liters, a spray duration from 45 seconds to 180 seconds (depending on its tank capacity) and a range of 9 to 12 meters.

Because the carbon dioxide is discharged in a form of a cloud which consists of a mixture of both solid and gaseous CO2, the discharge range is short compared to other fire extinguishers. Any wind or drafts may cause the agent to be disbursed away from the fire.

While carbon dioxide in not considered toxic, care should be taken to avoid discharging the extinguisher in a confined space and thereby reducing the O2 availability for breathing.

Just like the Dry Chemical fire extinguisher, the CO2 agent is discharged by pulling the safety pin and squeezing the lever while pointing the nozzle or hose at the base of the fire. Avoid touching the end of the hose or “horn” of the fire extinguisher as it will be extremely cold and could cause cold burns.

Dry Chemical Fire Extinguishers have two different designs. They are:

The Dry Chemical fire extinguisher removes the heat from the fire in extinguishing the fire.

The Powder used in the ABE Fire extinguisher is monoammonium phosphate and removes the heat from the fire when the powder lands on the fire and melts, thereby smothering the fuel source and removing the heat.

There are two types of foam fire extinguishers, wheeled (nitrogen cylinder) and portable foam (stored pressure). Foam fire extinguishers are used on Class A and B Fires, however, they are most commonly used on flammable liquids such as keytone, alcohol, acetone or esters.

Wet chemical fire extinguishers are most commonly found in industrial kitchens because they are specifically designed to combat cooking oil (Olive oil, sunflower oils, butter, lard) fires, labeled Class K fires. However, Foam fire extinguishers can be used to extinguish Class A and Class B fires if no other option is available.