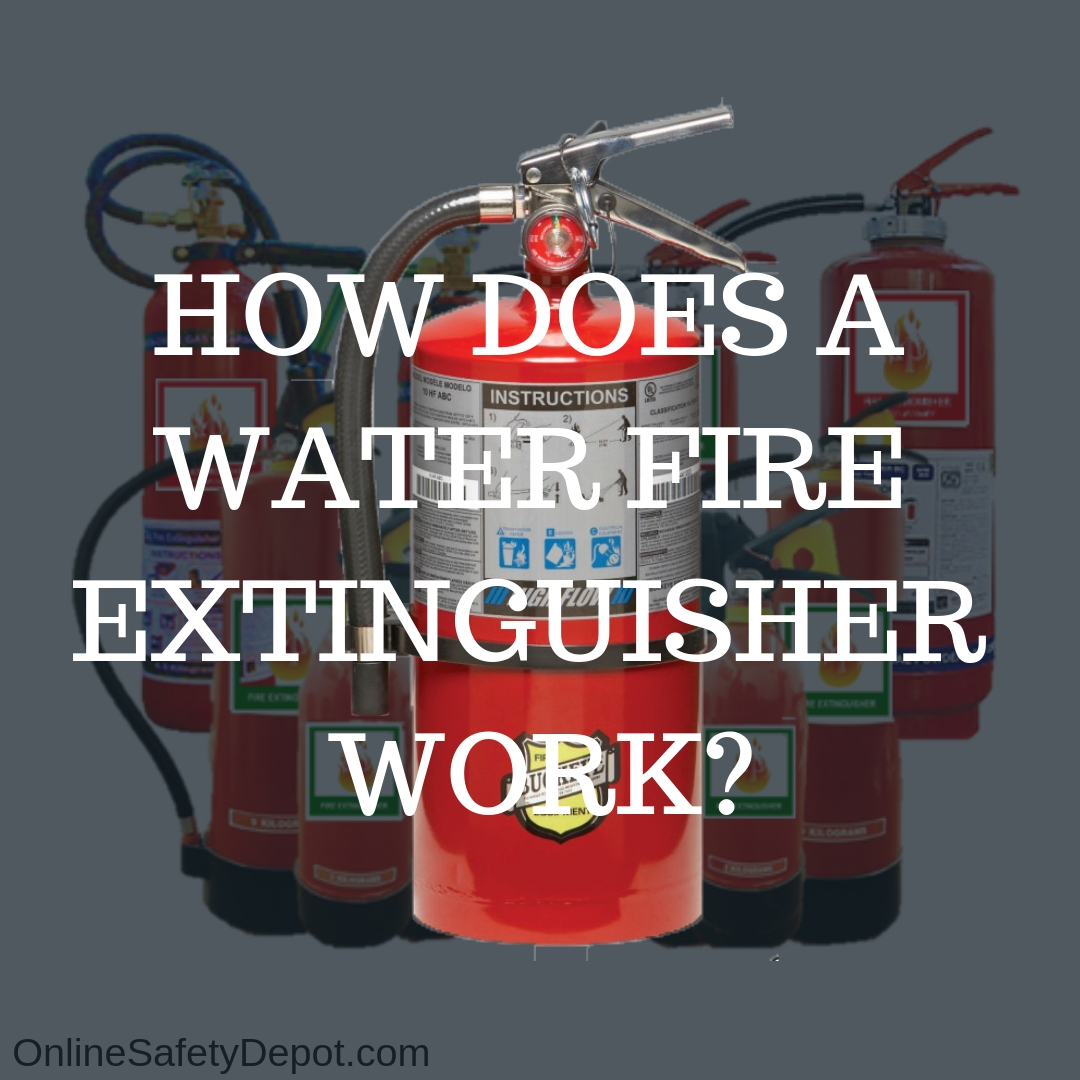 How Does a Water Fire Extinguisher Work? 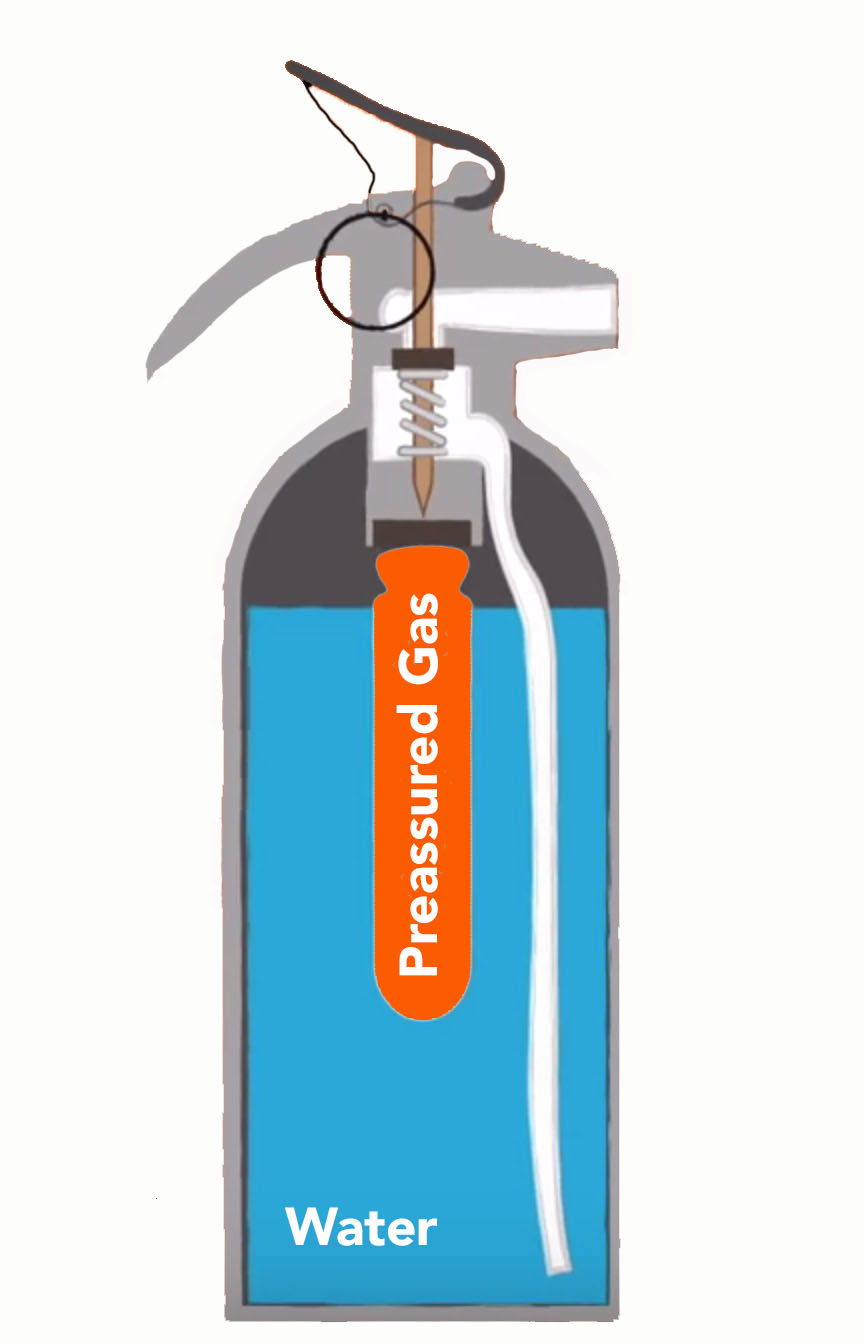 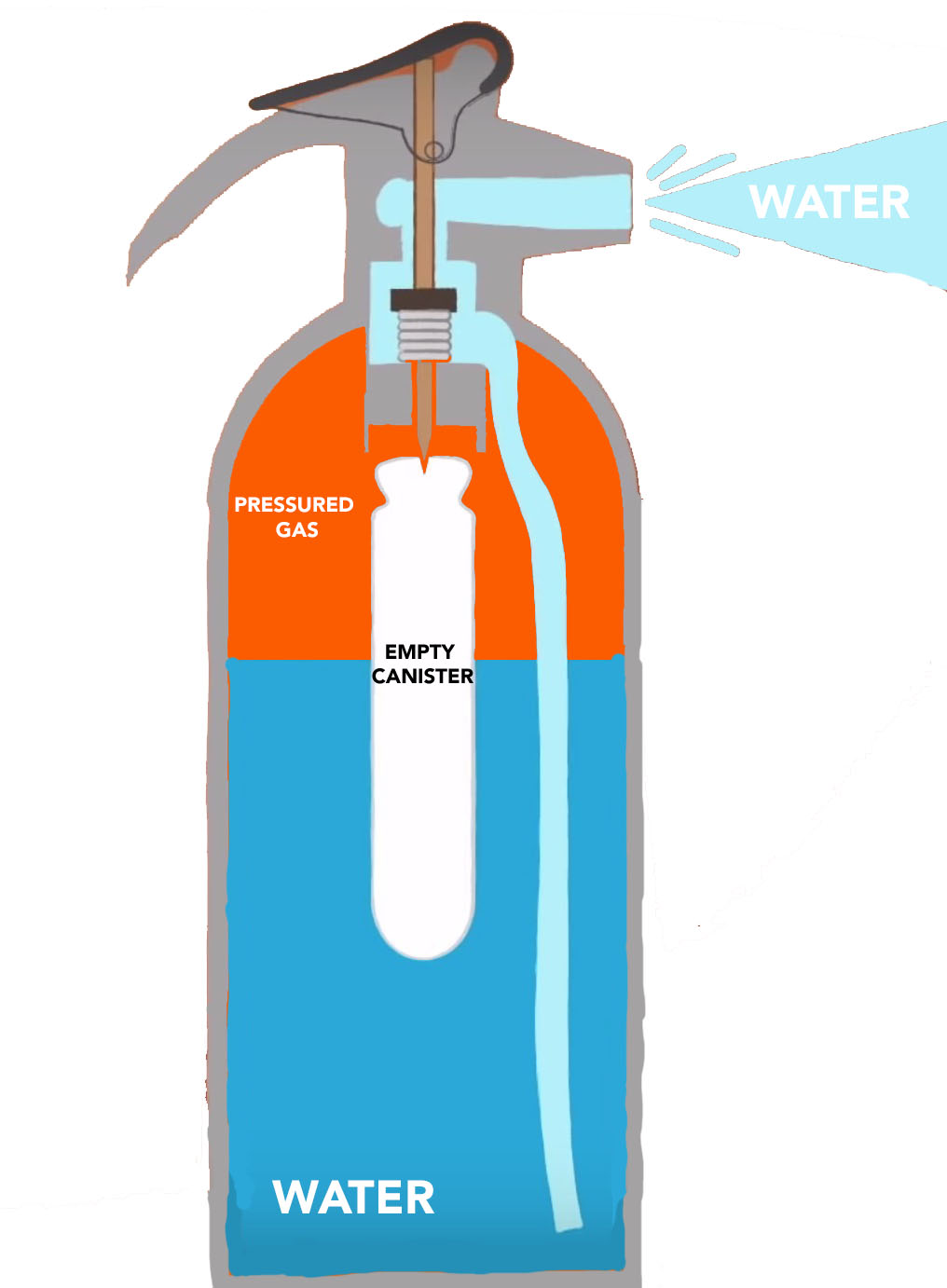 Parts of a Water Fire Extinguisher

Inside the steel cylindrical tank is a canister containing a high-pressure gas. The remainder of the extinguisher is filled with water. Inside the tank, a vertical tube extends the length of the tank and connects with the valve assembly. From here it leads to the outside nozzle where the water will be expelled to extinguish the fire.

To learn more about the parts of a fire extinguisher read our other article titled, “Parts and Components of a Fire Extinguisher”.

How to Operate a Water Fire Extinguisher
The steps to operating a fire extinguisher is simple and easy to understand, yet people tend to panic when they are confronted with a fire in the home or work place and spray the extinguishing agent ineffectively at the fire, resulting in the fire not being extinguished.

If you follow these simple steps when confronted with a fire, you’ll be much more effective against fighting.

For more information about the P.A.S.S. technic, please read our article titled, “How to Operate a Fire Extinguisher”.

For What Class of Fire is a Water Extinguishers Used?

The basic chemical reaction to produce fire is the same, (Oxygen + Heat + Fuel = Fire Reaction). However, each fire classification is different with its own unique characteristic and fuel source. This requires that you use a fire extinguisher specifically designed to extinguish a specific type of fire.

Water extinguishers are used on Class A Fires (Combustibles such as wood, paper, cloth, trash, and plastics) and extinguishes a fire by removing its heat component. When the heat is removed, the chemical reaction for fire is no longer viable and the fire is extinguished.

Which Fire Extinguisher Should I Purchase?

Consider the following questions to help you determine which one best fits your needs.

1- Where will the fire extinguisher be used? (Commercial or Residential)

OSHA requires that fire extinguishers used in the workplace meet appropriate standards of size/weight, extinguishing agent, and are placed in accessible locations with proper signs to identify them.

Fire extinguishers that are in the home are not under OSHA guidelines and as such, the rules, regulations and laws do not apply as they do in a workplace environment.

2- If a fire were to breakout, what would its fuel source be? (wood, paper, oil, gas, grease or electrical)
Fires that originate in a computer server room would more than likely be an electrical fire, whereas a large industrial kitchen fire would most likely be fueled with oil or grease used for cooking.

Fires that occur in the home may have a fuel source of wood/paper, electrical from a faulty outlet or grease from cooking in the kitchen. As a result, you would want to have a Class ABC fire extinguisher to combat all three potential fire types as it is able to extinguish all of them.

4- Who will be using the fire extinguisher? (grandpa and grandma, kids, men or women)

When Should You Not Use Water Fire Extinguishers?

If you use a water fire extinguisher on a Class B fire (flammable liquid of gas or paint, flammable gases,

Check out our resource page for more fire safety, construction safety and other related articles.