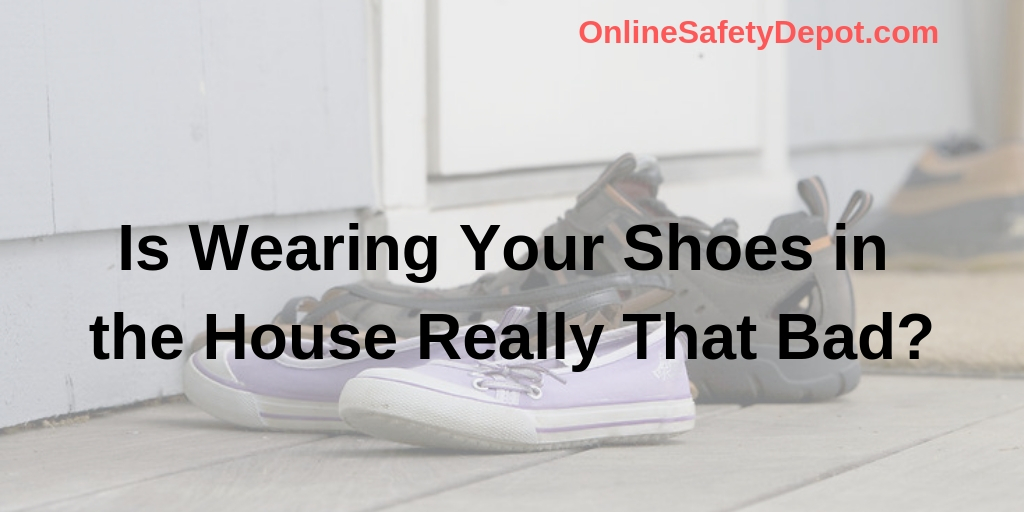 I absolutely hate walking on carpet without my shoes! It’s a weird quirk about me that my wife has had to learn to put up with over the years. A few years ago when we remodeled our home, I was able to convince my wife to put in Allure wood flooring in the kitchen, dining room, bathroom, hallway and even the master bedroom. However, the other rooms still have carpet in them.

Whenever I visit someone’s else’s home, I always take off my shoes, carpet or wood flooring, as I never want to be disrespectful to their home and risk tracking in dirt.

In my own home, I have two dedicated shoes that I can wear solely in the house. I don’t want to bring dirt into the house where our little girl, who is still crawling around on the floor, could get dirt on her hands and then into her mouth. Occasionally I may forget to remove my shoes if I’m in a hurry or if I’ll just grab something off the kitchen table and be on my way. So, is wearing shoes in the house really that bad? With a little research the answer is clearly YES!

Let me explain why wearing your shoes in the house, whether you have kids who crawl around on the floor or not, is a habit to avoid.

The Dirty World Around Us

It’s not just dirt that we need to worry about bringing into our homes, but also bacteria and viruses. Everywhere we go we could be stepping on some nasty microorganisms and other elements that can adhere to the bottom of our shoes.

For example:
Consider a simple trip to the grocery store. As you head out the door to your car you’ll likely step on some oil in the garage from the car or perhaps some dirt that has fallen off the car frame. Could the fallen dirt contain traces of bird poop, road kill, oil from other cars on the road? Also consider the collection of dirt, bacteria and other “bugs” that have collected there over time on your car floor mat from the multiple trips in and out of your car.

Once you have arrived at the grocery store you are required to make the walk across the parking lot into the store. Consider the possibilities that you will step in some form of animal droppings from bird, dog, cat, rat or some other animals who has traversed the lot. There is also the germ collection from simply walking around the store where everyone else’s dirty shoes have trodden. Then, you get to retrace your steps back to the car and home repeating the process of potential dirt and germ collection with each and every step.

If you go into the house with those same shoes, you’ll be bringing in the collection of germs from the your day’s journey. I’m pretty sure by this point, the 5 second rule is no longer viable!

A microbiologist and professor at University of Arizona, Dr. Charles Gerba, conducted a study in which he determined the number of bacteria that collects on the bottom and inside of  footwear during everyday use.

The study found that, on average, 420,000 units of bacteria were present on the outside of the footwear and 2,887 units on the inside. That’s a lot of bacteria! Some of the more noteable bacteria that was found included:Escherichia Coli: While most strains of E.coli are harmless to the human body, some strains are known to cause diarrhea, intestinal and urinary tract infections.

Meningitis: A condition of inflammation or swelling of the protective membranes that covers the brain and spinal cord. The treatment for meningitis varies depending on the cause, bacterial insult, cancer injury, drugs, or infections.

Diarrheal Disease: This disease is the second leading cause of death in children under the age of five years. However, this disease is preventable through drinking clean water and proper hygiene.

Klebsiella Pneumonia: This bacteria is normally found inside the intestines of the human body. However, in other areas of the body it can be quite problematic and is a common source for wound and bloodstream infections.

Pneumonia: An infection of the lungs. The air sacs that make up the lungs fill up with water and other fluids which makes it hard to breath because oxygen isn’t able to effectively reach the bloodstream.

Serratia Ficaria: A very serious and rare cause of infections in the respiratory tract and in wounds.

The study also found that 96 percent of coliform and E.coli bacteria that was on the outside of the footwear indicated contact with fecal material that came from public restrooms.

The bacteria mentioned above, that was on the shoes, had an extremely high transfer rate of 90 – 99 percent to uncontaminated surfaces. This means that whatever you stepped on in the dirty world of public restrooms and animal fecal matter is likely to end up in your home.

I’m even more grossed out after writing this article! So, what can we do from here? Well, a number of things. For starters and most obvious, don’t wear your shoes in the house! Have a place where you and guests can leave shoes before venturing into the house. Secondly, wash your shoes from time to time. Dr. Gerba’s study found that there was a 99 percent reduction of bacteria on the shoes after washing them. Lastly, if you are like me and need to be wearing shoes, get a pair that are designated for indoor use. Never wear them outside, even if it is a “quick” run to the car and back. If you do, thoroughly wash them before wearing them around the house again.

It is also recommended that you get your carpet professionally cleaned at least twice a year. This not only helps remove the bacteria, but also maintains the life of your carpet making it look clean and new for a longer period of time.

Hopefully you already knew this and remove your shoes each time you entered your home. If not, I highly recommend that you start today by getting your carpet cleaned and purchasing some comfortable shoes to have inside. Or, go shoeless when in your home.

Previous: How to Change a Flat Tire on a Car or Truck
Next: What is the Most Dangerous Room in the House?